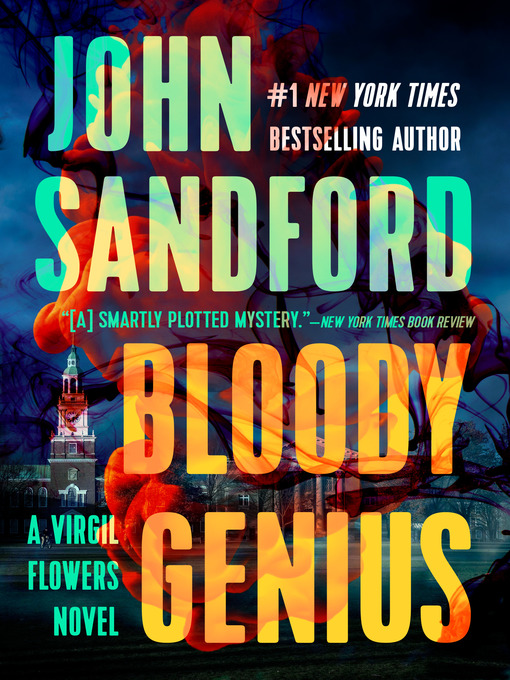 Virgil Flowers will have to watch his back—and his mouth—as he investigates a college culture war turned deadly in another one of Sandford's "madly entertaining Virgil Flowers mysteries" (New York Times Book Review).
At the local state university, two feuding departments have faced off on the battleground of science and medicine. Each carries their views to extremes that may seem absurd, but highly educated people of sound mind and good intentions can reasonably disagree, right?
Then a renowned and confrontational scholar winds up dead, and Virgil Flowers is brought in to investigate . . . and as he probes the recent ideological unrest, he soon comes to realize he's dealing with people who, on this one particular issue, are functionally crazy. Among this group of wildly impassioned, diametrically opposed zealots lurks a killer, and it will be up to Virgil to sort the murderer from the mere maniacs.
Publisher: Penguin Publishing Group

Lackluster. That's the best, and saddest word I can find to describe 'Bloody Genius'.

All the John Sanford prerequisites are there - our favorite characters, a new interesting one, and seemingly unsolvable crime, but they did not add up to a good book. The dialogue is boring, the characters are uncharacteristically flat, one dimensional caricatures of themselves and the normally outrageously charming Virgil Flowers has evidently been neutered with the advent of the birth of his twins. The guy on the bar stool, Harry, a secondary character, has the most energy of the bunch. And he's clearly the most astute.

. . . "But I get three types at my McDonalds. I got kids who want to make money for a whole lot of reasons, and they're serious about it. They want to buy a car or go to college, or whatever. They hang in there, and they're determined and they'll work hard until they get what they want. Or a better job. Good kids. Hate to seem them go, but they always do. Then I got the kids who don't have any choice. Maybe they've got to work to eat, maybe they're bright enough to work at McDonalds but don't have a lot going for themselves. I like those kids because I've had some stay with my for twenty years. But the third type: they're no g*dd*mn(**) good."

"How's that different than it's always been?" Virgil asked?

"It is, believe me. There have always been kids who were no d*mn(**) good, but now it's everywhere. Everywhere. It's kids who know they're not going to be millionaires or billionaires or movie stars or famous singers, or in the NBA and it's all they want. They can't see past that. It's like they're not alive if they're not on TV. They don't want to be doctors or dentists or lawyers or businessmen, they want to be rich and famous right now. They don't want to work. All they want to be is a celebrity. Then at some point they realize it ain't gonna happen. They're not talented enough or smart enough, and they sure as sh*t(**) don't want to work at getting to be famous. When they figure that out, that it ain't gonna happen, they turn mean."

"That's right, mean," Harry said. "You'll get kids who'll kill you for no reason. To feel important. What's more important than killing somebody? You say, you'll go to prison. They don't care. They don't even care if they die. They'll tell you that. 'Go ahead and kill me, I got no life.'" . . .

Referring to someone's response to the depth of Harry's reaction to a school shooting and what he would publicly do to the shooter,

'Bloody Genius' is a slow read. The clues are inventive red herrings but they lead to an infuriatingly maddening and trite denouement.

If you have never read a John Sanford novel, please, please don't start with this one. It's a mouldering corpse of the lively and fun books that came before it . . .

Bloody Genius is neither bloody nor genius.
2 Stars

** I included the quotes because I found them not only profound but also the most profound thing about 'Bloody Genius'. Granted, I have no expectation that this genre of books would be profound, but I can always hope. I asterisked letters of particular words in the quotes simply because I do not know the KCLS guidlines about their spelling and use in direct quotes from books.

Another good Virgil Flowers mystery. Keeps you guessing right till the end.

4 stars. The twelfth book in Sandford's Virgil Flowers series was a very good read. Virgil gets called in when a controversial professor, involved in a feud with another department, turns up dead. Following the clues and leads takes Virgil into unexpected places as he zeroes in on who killed the prof. A twisted journey until the final pages makes it an interesting read. I enjoyed the read.

It takes Virgil a bit to get to the bottom of this one. The edge of my seat was not being used like most Virgil Flowers stories. I made it to the end it was worth the wait. Still good.

I have not read all John Sandford's novels but I have read all the stories in the Virgil Flowers series. Great read.

As a long time fan of mystery/detective (serial) novels, I find the "F Flowers" novels rank pretty highly--- like Travis McGee... and as quirky as Hercule Poirot. John Camp is an excellent story teller... and knows how to add special details--- most of which I appreciate as I was born and raised in neighbouring Manitoba (now residing in Penang, Malaysia).- M.D.

As always, Virgil Flowers’ cases are a delectable read. Sanford’s assortment of seedy characters never disappoints. Count me as a fan.

Not his best Flowers book, but still good.

I need to "quote" 2 commenters from below. I LOVE Virgil Flowers books of all the John Sandford novels. And, I too like Virgil more when he is in a rural, out in the farms, ranches and small towns of Minnesota. This one took place at a large college. It was good, kept my attention and the last 1/3 of the book really wound up being true Virgil Flowers for sure.
I look forward to the next VF book....but hope that one goes back to the backwoods area where Virgil is more comfortable. Oh, and I can hardly wait for his twins to be born! That might put a tiny crimp in Virgil's life style and detecting!

There are no age suitabilities for this title yet.

There are no summaries for this title yet.

There are no notices for this title yet.

There are no quotes for this title yet.

Find it at Library